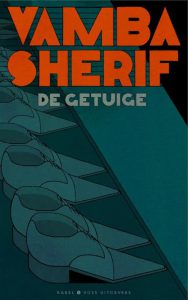 The Witness is a novel about a white man, Onno, who leads a carefully crafted and almost monotonous life in a small town close to a large city. At the age of seventy Onno finds love. The love interest is a young and mysterious black girl with a past possibly rooted in a civil war in an African country, a past that haunts her, and into which he is slowly drawn, so much so that his life as he knew it ceases to exit. The girl is a refugee, and lives in a camp tightly held by boredom. To Onno she appears to be afraid of something, but he cannot pinpoint that fear. He suspects it is connected to the brooding and imposing figure of a black man he once encountered at the refugee centre, a man whose presence he feels everywhere. His developing feelings for the girl increasingly put Onno in rather uncomfortable and risky situations.

While these events unfold, he discovers that his only son has converted to Islam in the period around 9/11. He wants to save him, because he fears that his son has chosen the wrong side. In the end, he is forced by his love for his son to betray him. Or was the decision prompted by the desire to save his own skin? Meanwhile, in the drama that has become the girl’s life, her true nature is revealed to Onno when he is faced with an incident that will change his life forever. The true face of war reveals itself to him, which is both horrifying and ambiguous, posing difficult questions and offering contradictory answers that compel him to make a choice. Onno must choose what to believe and what not to believe, and must be willing to bear the consequences of his choice.

The novel is an attempt to explore the accuracy of memory, the impact of the past on the present, and the decisions which affect our lives.

«The Black Napoleon
»The land of the fathers