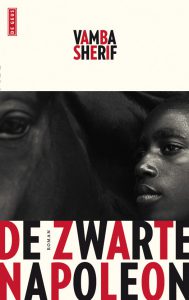 The Black Napoleon (2015): Zaiwulo is thirteen when he leaves his home Haindi in the forest in present-day Liberia and travels with his father to Musadu, an old city in the savannah in present-day Guinea. He comes to study under Talahat, a great scholar and head of a prosperous and legendary family, the Haidarahs. This family traces its origin to Timbuktu. It is believed that the source of the family wealth and vast knowledge are found in an ancient manuscript that Talahat keeps in his study. What is that manuscript and how powerful is it? And why no one else seems to have read it but Talahat?

Zaiwulo feels that there’s more to his presence amongst the Haidarahs than his father, who abandons him in Musadu, is willing to let on. Throughout his life he’s plagued by that secret and its implications, by the silence on the part of his teacher and everyone else. Zaiwulo’s story unfolds in a period that was largely determined by the will of a single man, Samori Toure. Once a trader, Samori became a slave to save his mother and rose up to confront his slave master. Samori became the only leader in Africa who confronted the might of the French and the British in an attempt to hold onto his empire.